Blogtober Day 2 – delving into the power of image vs actions.

Everyone loves a good meme but I recently shared one that I’ve gained a new perspective on and perhaps don’t agree with fully anymore. 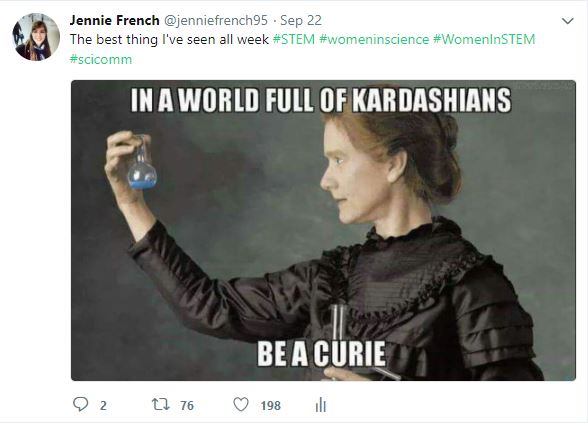 I saw the original picture on Facebook and instantly thought it was the best thing I had ever seen. In my mind the meme was saying ‘don’t focus on your appearance and what other people think of you, be inquisitive and creative.’ This was based on my incredibly naïve view that the Kardashians have no integrity.

A reply to my tweet and then a blog post by Dr Heidi Gardner sheds some light on this and I quickly saw that this was a misinformed view based on the fact that I don’t like the Kardashians and what they stand for, but that doesn’t make them stupid. What the Kardashians have managed is to do capitalise on an unfortunate event and that’s something that I would never be able to do. If someone released a sex tape with me in it, I would just want to bury my head in the sand and wait for it all to go away. Instead, the problem was tackled head on and now this family have an empire worth too much money to comprehend along with a TV show that people love to hate!

Back to Marie Curie though, she was born to a poor family in Poland in 1867, became a governess and then a teacher to be able to support herself and gain independence from her family. She moved to France in 1891 to live with her sister which enabled her to study at Sorbonne university in Paris. Three years later she met Pierre Curie, a scientist, and married him in 1895. She adopted the French spelling of her name which is how we know her now!

“Life is not easy for any of us. But what of that? We must have perseverance and above all confidence in ourselves. We must believe that we are gifted for something and that this thing must be attained.”

Along with her husband Pierre, she discovered two new radioactive elements, polonium and radium while unknowingly suffering from radiation sickness. Together with Henri Becquerel in 1903, Pierre and Marie won the Nobel Prize for Physics which recognised their work on radioactivity. It seems that nothing could stop her success; even after her husband died, she carried on working and developed a way to measure radiation for which she won a second Nobel Prize for Chemistry. Later on she developed small mobile x-ray units which she took to the front line of World War 1 in 1914. These machines are similar to the fluoroscopy machines that doctors now use to see moving images of inside the body. I’m quite sad that their name ‘Petites Curies’ hasn’t stuck!

After the war she won many prizes, was awarded several honorary degrees and had a hospital in North London named after her. In 1934, aged 66, Marie died from a condition that had developed after years working with radiation but she had achieved so much in such a short period of time and in the face of such adversity.

“Have no fear of perfection; you’ll never reach it.”

This is why I still partly agree with my original post; while I agree that all women should be able to choose how they look and what they are without any judgement so that they can be comfortable in their own skin, I think we should celebrate women based on what they do and not how they look on the surface. This era of selfies and Instagram is doing as much to damage women’s self confidence as it is trying to build it up. There are 7.2 million pictures on Instagram with of #bodypositive and most of them are women of different shapes celebrating their individuality and being happy with themselves! I love this, but I think it could be better to look at the person behind the photo and what they have done to become this positive and comfortable instead of just saying ‘oh she looks nice’. There are over 360 million pictures of #selfie but how many people look at a selfie and wonder what is behind the pout?

Pictures can mask achievements as much as they showcase them. The achievements that I’m talking about aren’t just scientific ones, setting up a successful business, loosing weight, running 5k, travelling to a new country, cooking some delicious food and not falling over in 6 inch heels are all worth achievements that anyone and not just women can be recognised for. Especially now, in the 21st century; a century of incredible social change, we should be recognising people for more than being able to take good pictures of themselves!

6 thoughts on “Curie and the Kardashians”

This site uses Akismet to reduce spam. Learn how your comment data is processed.